Does anyone remember those VR arcade / tech demo setups that were around in the early '90s? They were pretty complicated installations and needed dedicated operators to help the players get going... The games themselves were mostly original developments, rather than ports from computer/consoles, and, er, not very fleshed-out. Actually most of them were literally no more than tech demos, just there to show off what *everybody* knew was going to be the next big thing in gaming...

I remember one that was semi-permanently set up in a local mall where I & my school friends used to go; it was an early first-person shooter but everything was flat shaded polygons - no sprites, no textures! Even your gun was polygonal. No idea what it was called though. Must have been around '93-'94 - before Cybermax, Forte, etc. started marketing home PC VR kits. Was a big deal then.

What happened to all those setups - is there a site that documents them anywhere? Can I download the games somewhere and play them on an emulator?

I intended to play with this stuff back in the day but never got around to it. However, it's still on my To Do list. I did go as far as acquiring a Nintendo PowerGlove and Sega 3D googles, which I still have. Also, a few books published around that time which describe how to connect them to your PC and do simple home VR, using engines such as REND386.

If you want to get into VR nowadays (with modern tech) the way to go is probably using an Xbox Kinect together with the Oculus Rift headset.

I think the game I remember must have been "Zone Hunter" by Virtuality. Looking around it seems (unsurprisingly) their hardware was based on standard PCs (486DX or Amiga 3000s) with a lot of custom video and sound controllers added... Dactyl Nightmare was another popular one I remember seeing demos of all over the place but I don't remember if I ever played it myself. Would love to try one of these games now. I doubt they've held up very well but I *like* flat shaded polys so I'm sure it would be amusing.

Here's a neat overview of the hardware they were running.
http://wiki.skullspace.ca/Virtuality_SU2000 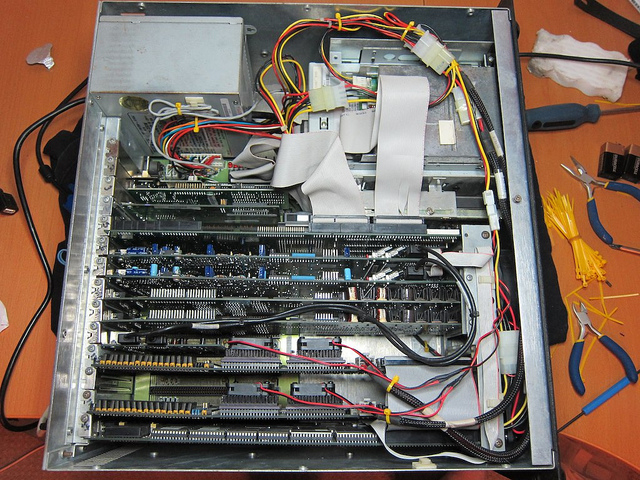 Hmm, single-board PC on a huge ISA backplane in a rackmount case. Very familiar! Looks like they've managed to populate just about every ISA slot they had though!

I've been following the Oculus Rift development for a while, nice to see someone giving 'VR' another shot, but I'm afraid they're just going to find the same thing the makers of the first generation kits did - they're just too gimmicky to really catch on. Back in the day setups like the Forte VFX-1 were surprisingly well-supported by games considering how few of them were produced. They go for fairly big bucks these days if you find one with all the necessary accessories (ISA interface card, controller, etc.) intact. Getting to play oldschool Descent on a VR helmet would almost be worth it though.

Thought I'd post an update in this thread. I got a bit obsessed with the idea of getting *some form* of VR gear going. A couple(!) of Oculus Rift dev kits popped up on Trademe in the last few days; both went in the $300-$400 range. Not bad at all, but... I just don't run much modern 3D stuff. New software is expensive, takes enormous amounts of bandwidth, and I don't have a computer that can run anything made after ~2010 anyway. I decided to stick to 1st gen VR, so early~mid-'90s. I seriously doubt a Virtuality CS1000 or SU2000 is going to come up on Trademe anytime soon so I was looking at home stuff.

You can occasionally find a Forte VFX-1 with the ISA controller card & accessories on TradeBay or wherever. They weren't cheap when new, and ... they're not cheap now either; the last one I saw for sale was being asked for over a grand. Hmm...

Meanwhile, back in the '90s (WTF? Has that sentence ever been written in a way that made sense?), you could get 3D shutter glasses for much cheaper than a full VR helmet. SimulEyes, 3DMax, or i-glasses were popular ones and were surprisingly well supported by games & apps. There was a mint-looking SimulEyes package on Ebay for just $49US, plus another $25 quoted for shipping.

BUT... I reckoned I could do better.

It turns out SimulEyes (and others) are essentially copied from glasses Sega designed for, of all things, the Master System in around 1989. The interface is slightly different but the technology was the same. Well, wouldn't you know it, a pair of knockoff Master System glasses were waiting for me on Trademe with a $1 reserve. Yep, no one else bid. One dollar and a quick pickup on the North Shore later and I had my glasses.

These were intended for PC and came with a VGA pass-through box. The custom driver modulates a sync carrier into one of the components of the VGA signal and the glasses take off from that. Well, two problems - the driver is for win9x/NT only (of course it is) and the VGA pass-through doesn't pass through text mode *at all*, making it completely useless on a DOS machine.

Fortunately, back in the day, the Sega-type glasses were the de facto standard for hackers playing with early VR gear! Just like I'm doing. So I went and found a copy of PCVR Magazine, Issue 2 (March/April 1992) where this handy schematic was published for a serial port interface:

(There is an ASCII art version floating around as well as a couple of variants but I stuck with the original source ... or rather, the first *published* source. Seems no one knows who originated this circuit; it just appeared out of the murky depths of Usenet one day.)

About $10 of components from Jaycar and Surplustronics and some lead vapour poisoning got me here:

Stuffed it in a perfectly-sized project box I had lying around:

Tidy! The on/off switch is not needed - I had it wired to swap the left and right eyes on the fly but that was introducing a bit of stutter so right now the switch does nothing. Everything is powered by the serial port; no ps or external connections needed.

Okay, so the first thing I learned was that despite the box claiming you could use these glasses on an LCD monitor, that really doesn't work at all. My last awesome CRT died a couple months ago so I gave it a try on the LCD anyway - its 75Hz refresh should be enough but the pixel response is just too slow. Images end up ghosting way too long in the wrong eye & the effect is spoiled.

So yesterday I walked into a local computer store and asked if they had any old CRTs lying around. For a grand total of "free! You're saving me the trouble recycling it" - I walked out with this:

(and walked home with it too - these stupid things are heavy! I knew I should have driven. Anyway...)

BTW I hooked everything up to that dual-P3 rack-mount system I got for no real reason. The colour matches so perfectly though. Also it looks like a knockoff Virtuality SU2000, so there's that.

Finally I can play Dactyl Nightmare! - well, not really of course. That only runs on Virtuality's custom hardware. But somebody remade the 'game board' for the Rend386 VR engine, which conveniently supports my 3D glasses & serial interface. (It also supports a Nintendo Powerglove on the same serial port using another custom interface, but I'm not ready to go full-on nerdcore with this yet.)

It's obviously impossible to show a screenshot of what this actually looks like, but this might get you the rough idea of how it works. It looks like the left eye and right eye images are superimposed but in reality they are flipping back and forth on the vertical retrace, with the corresponding eye of the glasses being blacked out via the serial sync signal. It sounds really flickery and painful but it's not bad once you get used to it! Higher refresh rates help (Rend386 was only running at 70Hz here), and don't look directly at any flourescent lights unless you're up for a strobe rave.

So playing with tech demos is fun, but what about 'real' games? Surely nothing's gonna support some old console glasses connected to a homebrew circuit? Well actually...

Turns out a lot of stuff relied on a popular driver called LCDBIOS.exe written by Donald Sawdai sometime around 1994, and that driver can run the serial interface just fine. Even in games which don't directly support LCD-Bios it can emulate some of the commercial drivers that were out there, like i-glasses or 3DMax. So on just about anything that supports 3D glasses, I can use mine.

Right now I've tried Descent 1 and 2, which are *amazing* in 3D and run beautifully at 78Hz with almost no ghosting, and an obscure Russian FPS called Mad Space that was designed for VR. Good fun. But yes, the 3 'D' kings of DOS shooters - Doom, Descent, and Duke 3D - support this as well as so many others, from SpectreVR (duh!) to Quake to whatever else...

So, for a total of about $15 I have ... well, it's not full-immersion VR with a helmet & head tracking, but I stopped caring about the third time I flinched in my seat to dodge incoming rockets! Honestly if you like games and have never tried *true* 3D you owe it to yourself to try it at least once... It is intense!

If only the glasses weren't so dorky looking.

Users browsing this forum: No registered users and 2 guests